The Wisdom and Madness of Crowds

One of my favorite books from a few years ago is The Wisdom of Crowds(2004), by James Surowiecki. Subtitled, Why the Many Are Smarter Than the Few and How Collective Wisdom Shapes Business, Economies, Societies and Nations, the book begins with a story from 1906, in which the British scientist Francis Galton was surprised to learn that a crowd could be quite wise. He found that a random group of attendees at a local country fair was, on average, nearly perfect in predicting what the weight of a live ox would be after it had been slaughtered and dressed. The actual weight turned out to be 1,198 pounds, while the mean estimate of the crowd was 1,197 pounds.

The book goes on to detail other examples of wise crowds, from locating a lost U.S. submarine in 1968 (the group estimate was off by a mere 220 yards from the submarines’s final resting place), to something particularly relevant to today’s pandemic world, the largely uncoordinated efforts of investigators and laboratories around the world to identify that a coronavirus (SARS-CoV) was responsible for a severe respiratory disease outbreak (SARS) which originated in China in late 2002. The book also provides examples of the failure of crowd wisdom, such as the organizational dysfunction in the Kennedy administration which led to the Bay of Pigs fiasco in 1961, or that at NASA which led to the Space Shuttle Columbia disaster in 2003.

The title of the book is an allusion to a much earlier book, Extraordinary Popular Delusions and the Madness of Crowds (1841), by Charles Mackay. This book was published in three volumes, consisting of National Delusions (such as economic bubbles and religious relics), Peculiar Follies (to include the Crusades and witch trials), and Philosophical Delusions (such as alchemy and fortune telling). In full disclosure, I have not read this book.

But, a new favorite of mine is The Madness of Crowds (2019), by Douglas Murray. This book, subtitled, Gender, Race and Identity, focuses on our current social justice issues of sexual orientation, feminism, race, and transsexuality. The author is a conservative journalist, so some of my more progressive friends might find some of his comments irksome, but I think he makes some very valid points. For example, the reverse-outing of gay entrepreneur Peter Thiel as “not gay”, and black entertainer Kayne West as “not black”, for their support of Donald Trump. Or, the unavoidable clash between advocates for women’s rights and those for transsexuality, such as in allowing transgender women to participate in women’s sporting events. Interestingly, and you might not otherwise learn this fact until the end of the book, but the author happens to be gay, which makes his observations regarding the gay rights movement especially valuable.

Murray’s observations can be extrapolated far beyond the social justice sphere, to any situation in which groupthink, the self-reinforcing opinions of a like-minded in-group (often expressed in opposition to an out-group), come to predominate. Examples include those who believe in QAnon, that vaccines cause autism, that GMO foods cause cancer, that marijuana cures cancer, etc. Or, as a friend of mine recently pointed out to me on social media, groupthink also lies at the core of those who both admire and loathe former President Donald Trump. 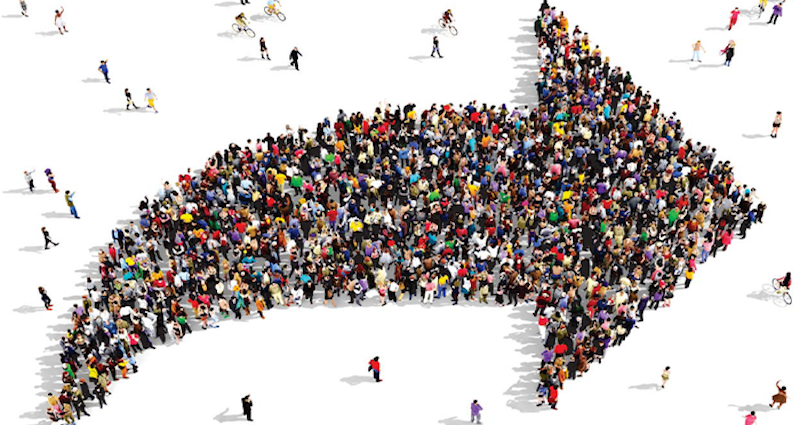 How might we integrate these two perspectives, the wisdom and madness of crowds, harnessing the benefits of the former while avoiding the pitfalls of the latter?

Helpfully, Surowiecki suggests that there are a few essential elements for a crowd to be wise; that there be diversity, independence, decentralization, and a means of aggregation, of processing individual opinions into a group consensus. I think he’s correct, and will note that his observations are consistent with the findings from complexity science, which I’ve mentioned previously. I want to comment further on the criterion of diversity, for it’s not the same as we commonly use that term now, such as for race or gender, but on diversity of opinion. Those opinions, in turn, hinge of diversities of knowledge, experience, and underlying belief systems.

In contrast, crowds can be unwise, or even mad, when they exhibit the opposite of these traits; specifically, when they exhibit homogeneity of opinion, when they exchange independence of thought for groupthink, and when they are centralized, even if not structurally, but informally, such as the cross-sharing of opinions within like-minded groups on social media. Mad crowds also tend toward imitation, encouraging or discouraging certain behaviors and thoughts within their group, and emotionality, generating feelings of belonging with the group, and feelings of fear or hatred of those without.

Another essential difference between wise and mad crowds is the focus of their interest. If a thing can be knowable, a fact that can be determined, such as the weight of an ox or the location of a sunken submarine, then the right crowd can indeed exhibit wisdom. If, on the other hand, the focus is an opinion, a matter of taste or preference, crowds can tend toward madness. Some matters of taste or preference, such as a favorite flavor of ice cream, or a fondness for a beach vacation over one in the mountains, are not prone to madness. We realize there is no objectively right or wrong answer here, but just differences of opinion. But, add an unhealthy dose of emotion, of fear or outrage, and watch out!

I believe we can be collectively wise, but that our current politico-cultural environment tends toward madness. I hope we can fix that going forward.

The Near-Term Future of Healthcare Reform Competition in Politics