The Near-Term Future of Healthcare Reform

With the Biden administration now in place, but faced with razor-thin Democratic majorities in Congress, what might we expect in the realm of healthcare reform in the near future? Probably not much.

Democrats maintained their majority in the House, but their advantage is much diminished, down to 10 seats, with three vacancies yet to be filled, and the results of two races still contested. Control of the Senate flipped into marginal Democratic control, as a result of the two Georgia runoff elections in early January. The Senate is now tied 50:50, leaving Vice President Harris with the tie-breaking vote.

These tight majorities in both houses of Congress make sweeping healthcare reforms unlikely. And, looking forward to 2022, it is historically uncommon for the party which holds the White House to gain seats in the House or the Senate, so the Biden administration could face a divided Congress in just two years.

The last major healthcare reform effort, what became the Affordable Care Act, happened during the first two years of Obama’s first term, when he briefly enjoyed Democratic majorities in the House and Senate. It garnered not a single vote in support by Republicans in the House or Senate. Arguably the most significant legislative action during the Trump administration, the Tax Cuts and Jobs Act, was likewise passed during his first two years in office, when he also briefly enjoyed Republican majorities in the House and Senate. It also received no support from Democrats in the House or Senate.

Without broad-based legislative support, the future of “Bidencare” is dim. Biden had proposed the provision of a “public option” insurance similar to Medicare, lowering the Medicare eligibility age from 65 to 60, increasing tax credits to lower insurance premiums, among other ideas. But, all of those ideas would require passage of legislation through both houses of Congress, which is unlikely.

The Biden administration has already signaled that it will focus first on the COVID pandemic, as it should. This will include ensuring the swift rollout of approved COVID vaccines, whose unprecedented quick arrival is properly credited to the Trump administration. Beyond that, what will remain available to Biden are administrative regulatory changes, which were also all that were available to Trump recently, after the GOP-controlled Congress failed to offer passable legislation to “repeal and replace” the ACA during his first two years. 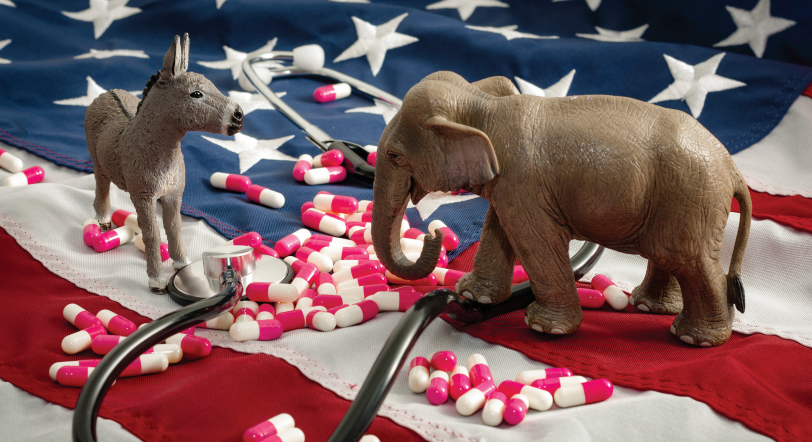 This highlights an important issue when it comes to regulatory changes; what can be done by one administration can usually be undone by the next. It’s tit-for-tat changes, when Americans need real healthcare reform.

Which brings me to my favorite quote from a couple of months ago, from a VP of a healthcare organization in Indiana and Illinois: “Policy and overregulation of the healthcare industry is increasing the cost of care by hundreds of billions of dollars each year… we have added layers upon layers of regulations, attempting to correct the challenges created by the last batch of regulations. (It is) time to step back, be honest, and realize that, yes, the baby is ugly.”

The Biden administration may continue some regulatory efforts instigated by the Trump administration. These include efforts to reduce prescription drug prices, but I am skeptical that the “healthcare industrial complex”, in this case the pharmaceutical companies, are likely to meekly acquiesce. The administration will also likely seek to expand coverage and reimbursement for telemedicine services, which unfortunately are more vulnerable to fraudulent clams than in-person visits, as has been made clear recently by several Department of Justice investigations.

With legislative options unlikely, and administrative ones limited, we should also consider the judiciary. The Supreme Court heard oral arguments in California v Texas back in November. That lawsuit seeks to invalidate the ACA based upon the argument that since Congress eliminated the individual mandate in 2017, the entire law should be judged unconstitutional.

Although oral arguments are not a perfect predictor of an eventual decision, it is telling that even conservative members of SCOTUS, to include Chief Justice John Roberts and Justice Brett Kavanaugh, seemed to express the opinion that the ACA was “severable”, meaning that the remainder of the ACA could constitutionally stand without the individual mandate. They also questioned whether the GOP-led states and individuals even had “standing” to challenge the ACA in the first place, meaning that they had somehow been “harmed” by the elimination of the individual mandate. We’ll probably have to wait until June to learn how SCOTUS rules, but I’ll be surprised if they invalidate the entirety of the ACA, especially in the midst of a pandemic.

So, there we are. No obvious legislative paths forward, limited administrative ones, and little likelihood of significant judiciary action. As I stated in my last healthcare reform entry, we’ll probably have to wait a couple of election cycles before we might hope to realize a better healthcare system than the one we have now.

An Electoral College Addendum The Wisdom and Madness of Crowds