Probably like everyone else, I have a diverse group of acquaintances. Family, friends, neighbors, colleagues, patients, and a load of people I’ve met during my forays into politics. Not everyone agrees entirely with my political views; in fact, only a minority even come close. That doesn’t mean that they’re wrong and I’m right, just that we have different opinions. Yet, the one thing almost everyone I know agrees about is that political polarization has become a huge problem in America.

It certainly seems to be a worsening problem to many of us, but is it? Are we more politically polarized than in the recent past? That seems clear enough from any number of studies, including the following from the Pew Research Center. 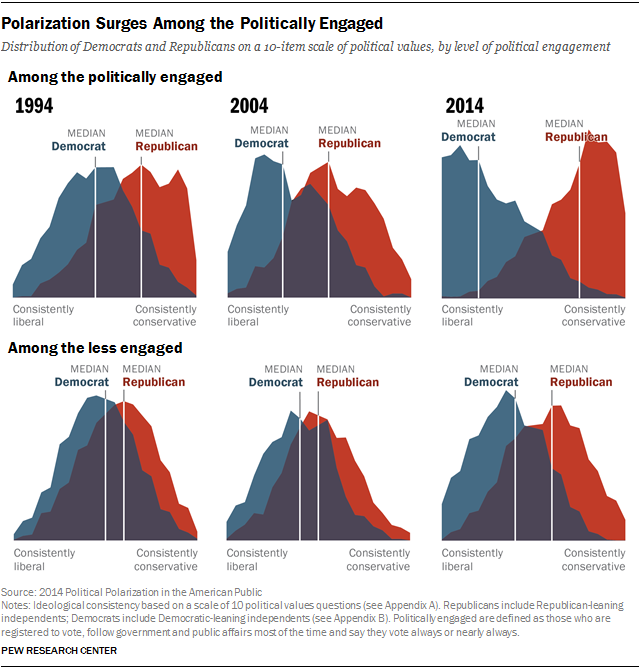 That static graphic is pretty remarkable. Even better, go to the link above and click on the “Animate data” button. The two major parties migrate around quite a bit, but generally hewing toward the center. But, in 2004, both parties began drifting dramatically apart. This data is over four years old, but the trend has been continuing as other sources reveal. Of particular note in the above graphic is the marked polarization among the politically engaged, as compared to the much more modest polarization among the less engaged.

This shift can also be seen in another graphic from the same Pew study, or in the “Animate data” function. In 1994, American ideological views approximated a normal distribution, or bell curve. Twenty years later, the middle has flattened considerably, as more Americans have moved to either political extreme. Our nearly normal distribution of American political beliefs is now being dominated by the political extremes at the tails of the bell curve. “The tail is wagging the dog”, as the saying goes. 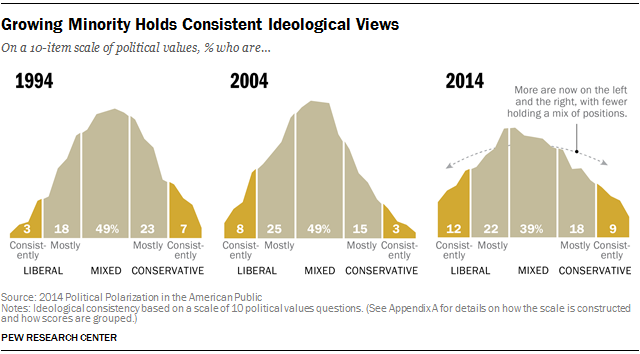 Given this, is it any surprise that more Americans now self-identify as independents, rather than members of either of the two major parties? This is from Gallup, but any number of polls show the same trend. This mirrors what I’m seeing anecdotally from a large fraction of Americans; they simply don’t feel like the two major parties represent their views much of the time.

Of course, many of these self-identified independents do tend to vote somewhat reliably for one major party or the other. But, not all do; and as a businessman, what I see in that growing slice of independent voters is lost market share!

Here’s another recent study, called the Hidden Tribes, which used a different methodology. The authors didn’t ask about partisan preference, but rather about people’s beliefs and values, and their positions on a number of issues. They identified seven more-or-less distinct groups, which are labeled below. These include the Progressive Activists on the left and the Devoted Conservatives on the right, who hold nearly polar opposite views on every issue, but are each distinct minorities of the whole. The authors lumped most of the groups in the middle and labeled them the Exhausted Majority.

Particularly notable is that Politically Disengaged cohort of 26%. Personally, I wouldn’t have been surprised if that proportion had been much higher! If the above study is accurate, and I’m inclined to believe it is based upon other studies and my own anecdotal experiences, a large proportion of Americans, those in the middle, have largely tuned out of politics. And, that shouldn’t be surprising, as only around 55% of eligible voters even bother to vote during presidential elections!

What is driving political polarization?

As with any complex question, there are no simple answers. A fractured media market is oftentimes mentioned. When I was growing up in the 1960s and 1970s, news sources were primarily limited to three broadcast TV stations, the local newspaper, and perhaps a weekly newsmagazine. Now, we have multiple cable TV outlets, talk radio, seemingly endless online content, and, of course, social media.

We now have the option, and many Americans take it, to tailor our media consumption to those sources with which we already are inclined to agree. We can choose, if we like, to live in selected echo chambers, or information silos. I read a quote once that went something like this; “we used to consume the media to inform us, now we do so to affirm us”. I haven’t been able to find the source for such a quote, so if anyone knows who it came from, let me know. Otherwise, I’m going to start claiming it as my own!

But, while these new media sources may be partly to blame, they are ultimately just tools, and tools can be used either in a productive manner or a destructive one. I am hopeful that we’ll learn how to manage these relatively new toys in a more useful manner.

Interestingly, former Representative Jim Leach once told me that he felt that political polarization in D.C. started to increase in the 1980s, citing airline deregulation as a cause. Following the Airline Deregulation Act of 1978, the prices for air travel began to steadily decrease. That’s a great thing for the American consumer generally, and what it meant in D.C. was that Representative and Senators now were able to jet back home most weekends, which you would think we also be good for their constituents. But, one result, in a Freakonomics kind of way, was that our elected officials and their families spent less time in D.C., socializing with members of the opposite party, going to little league games together, etc. And, of course, it’s much easier to demonize the opposition if you don’t know them personally. Anyway, I thought that was a fun insight, if nothing else.

Most important, I think, is to recognize that political polarization tends to be a vicious circle, once initiated. As the two major parties started to move to political extremes, for whatever reasons, those in the middle began to opt out. That left the more politically engaged, the bases to which the two major parties must appeal, leading to greater polarization. More Americans in the center again dropped out, continuing a self-perpetuating cycle.

The good news / bad news thing here is that this political polarization cannot continue. It’s an inherently unstable system, and it will cease. Whether it ends by our efforts to change it in a systematic manner, or whether change is force upon us in a chaotic fashion will be up to use. More on this later.

So we seem to be more politically polarized, but should we care? Personally, I think the answer to this question is obvious. If only from a mental health perspective, we need to do better. You don’t have to spend much time on social media or reading the opinion pages of your local newspaper to become either outraged or despondent!

But apart, from our mental health, I think our political polarization is especially damaging precisely because more and more Americans are dropping out of the political process. As I’ll talk about in a later post, we humans tend to be better at solving problems when we have more input and diverse views. In case you haven’t heard of this, it’s the Wisdom of Crowds argument, and I believe it is a valid one. We now have fewer voices at the political table, and those voices are less diverse overall, largely reflecting the two extremes. That’s not a constructive model to solve our problems.

Still, as harmful as political polarization is, I see it as less a cause than a result of other problems. It’s not the disease, but a symptom, a manifestation of the disease.

What’s the disease? Well, in short, political corruption. Not so much corruption of individual politicians, though that is certainly a problem. Rather, corruption of the political system, especially at the federal level. Political dysfunction might be a better phrase, but as I will review in my next post, our political system is functioning quite well, just not in the interest of the average American. If you’d like to read ahead, I can recommend this analysis from Harvard Business School. I personally don’t agree with everything in it, but I do believe it’s a good place to start.

Until then, stay warm and stay safe!