I want to add a few comments and links regarding my recent several posts on political polarization and corruption. Some of these came to my attention after my posts, others were actually released after my posts, and a few I just couldn’t find a good place for at the time, so I am adding this supplement.

I only recently learned of Jonathan Haidt, the author of The Righteous Mind: Why Good People Are Divided by Politics and Religion, among many others. I’m surprised that I hadn’t run across him before, as he writes about issues that long have been of interest to me, and he is a member of the Board of Directors for Better Angels, the group I’m now involved with.

Haidt has multiple videos online which I highly recommend, but here I’m just going to point out two, both dealing with political polarization. The first is shorter in length, but the main reason I’m including it is because the graphics and the explanation of the causes of political polarization according to Haidt are a bit clearer. The second one is much longer; however, I found it a bit more interesting because of some additional detail, which I’ll discuss below.

In both videos, Haidt provides his explanations for our growing political polarization. He points out ten specific reasons, which interact with one another, and became particularly important beginning in the 1990s. I won’t go into all of that, as Haidt does a good job explaining his views, especially in the first video. What I want to point out are some interesting things in the second video, which also includes a short presentation by NYU Law professor Rick Pildes, then a brief Q&A with both speakers.

Both Haidt and Pildes agree with the idea of open primaries to combat political extremism, which I also support. They also agree that ending gerrymandering would be a good thing, but that it likely wouldn’t have a tremendous influence on the composition of Congress. That’s probably true, but I still think it is a good practice to abolish. Surprisingly, Pildes argues that we should have stronger party leadership within Congress, arguing that it has been more independent members that has exacerbated polarization. He cites Elizabeth Warren and Ted Cruz as two examples. He argues that if party leaders could exert more control over their members, they could corral them to compromise toward more centrist solutions. This is the polar opposite of what I have argued, that too-influential party leaders are stifling discourse among rank-and-file members. And, I’m not convinced by his argument, but perhaps he’s correct. Achieving some forced consensus between two extremely polarized parties doesn’t guarantee a good result. I’m making a two wrongs don’t make a right argument, here. I think Congress should be a battle of ideas between all elected members, not just those few in leadership.

Haidt points out that one of the reasons we had lower polarization during the mid-20th century is that we faced common enemies during those years. The Great Depression, World War II, the Cold War. He correctly points out that government grew larger with each of these major challenges, but then never shrank back to pre-crisis levels. Haidt is from the political left, so one of his suggestions may come as a surprise, but he argues that we should shrink the size of the federal government! Devolve more power to state and local governments. Trust in private enterprise and public-private partnerships to do those things that government doesn’t do very well. As a result, our federal government will be better able to do those things we need it to do. I could not agree more! Haidt also suggests we might need a new common enemy, and that could be our current political dysfunction.

And, to blow some of my conservative readers’ minds, I now give you a Hollywood actress! Yes, Jennifer Lawrence comes from the political left and has been critical of Donald Trump. But, she’s also been critical of Democrats who disparaged Trump’s supporters. And, no, I don’t believe we should reflexively take our political cues from celebrities just because they want to share their thoughts with the world. But, I still think it’s a pretty powerful video and worthy of a viewing. It actually came out the day before my last post, but I didn’t see it until a couple of days later. By the way, Lawrence reports she is taking a year off from filmmaking to focus on political activism with RepresentUs.

The Atlantic came out with an article this week, The Geography of Partisan Prejudice, which features a cool interactive county-level map of political polarization. The underlying study is probably underpowered, as it relies on only 2000 survey respondents. But, based upon my anecdotal experience as a former candidate, the results ring true to me. According to the study:

“In general, the most politically intolerant Americans, according to the analysis, tend to be whiter, more highly educated, older, more urban, and more partisan themselves.” 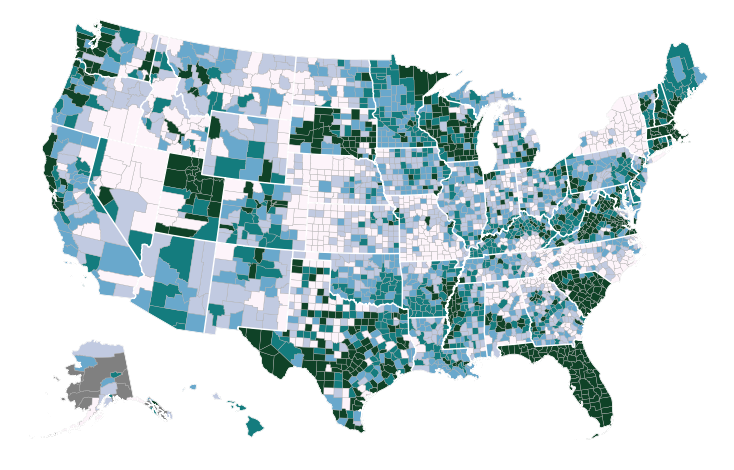 A couple of other pieces that I couldn’t find a place for in prior posts are an article on the Independent Voter Network, The Case for Abolishing Political Parties in the U.S., and an American Bar Association article, Paradoxes of Political Parties in American Constitutional Development. I’m not going to offer any commentary on either, but thought they were both interesting, and that some of you might want to read them, too.