It’s a Bloodbath Out There! 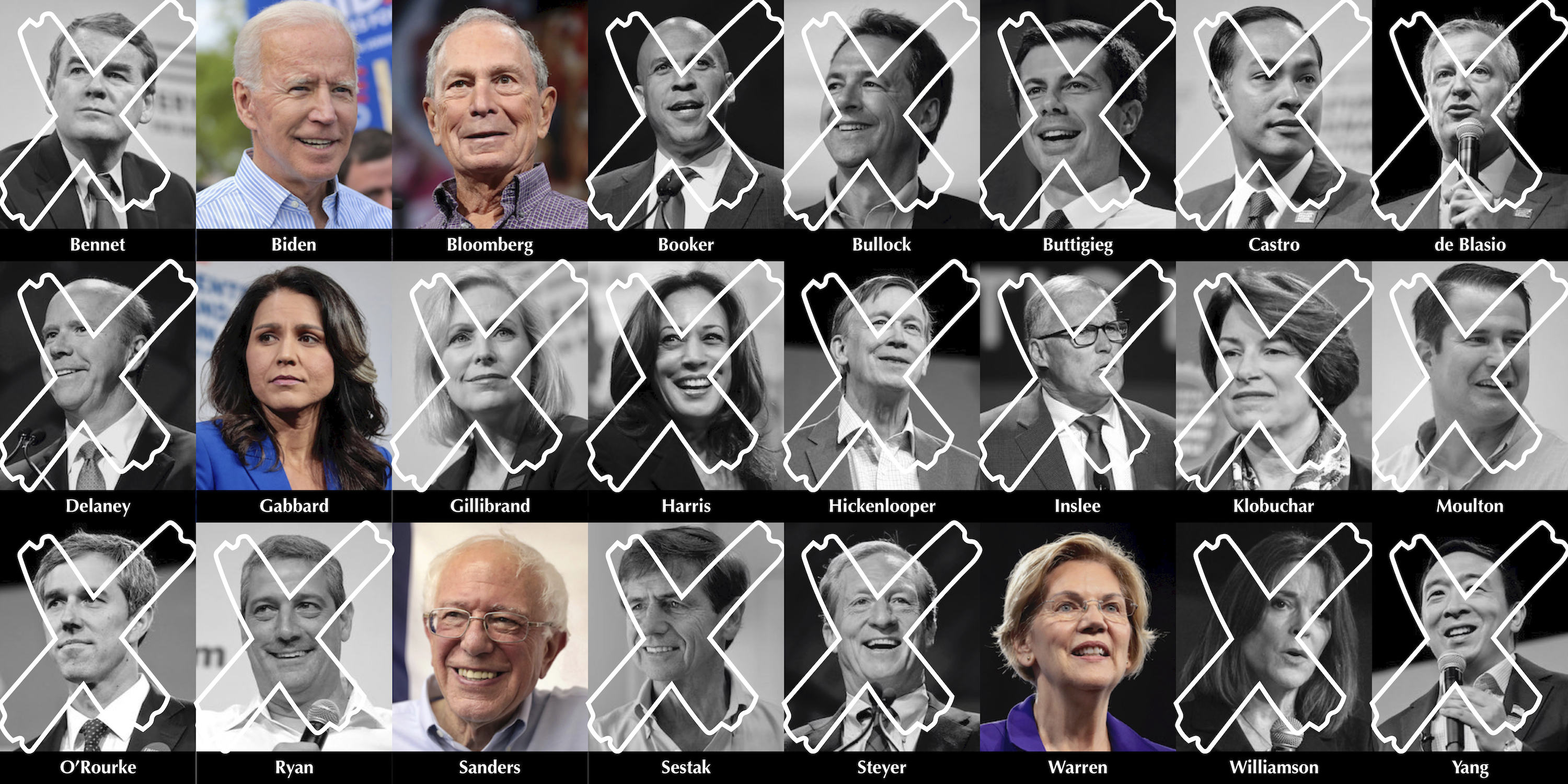 In my last post, One Republican’s Take on the Democratic Candidates, written just prior to the Iowa caucus, I focused upon nine of the eleven candidates then still running. A month later, and we’re down to five, the evening prior to Super Tuesday. It’s going to be very interesting to see how things shake out after tomorrow. Until then, we should take a moment to thank all our contestants for playing along.

It looks like it’s shaping up to be a battle between Sanders and Biden, but Bloomberg seems likely to stay in, at least for now. Perhaps he’s hoping for a contested convention, and that’s not an unreasonable hope according to FiveThirtyEight. They currently forecast a 2 in 3 likelihood that no candidate will secure more than half of the available delegates by the time of the Democratic convention. They give odds of 1 in 6 for either Biden or Sanders winning enough delegates to avoid a contested convention. Bloomberg, Warren, and Gabbard are each given a less than 1 in 100 likelihood of doing so.

I suspect Warren might throw in the towel tomorrow, and presumedly endorse Sanders, with whom she is most close ideologically. I’m not sure why Gabbard hasn’t done so long before now. Gabbard endorsed Sanders over Clinton in 2016, and hasn’t made many (any?) friends in the DNC since. Will Warren instead backstab Sanders and support Biden? She failed to endorse Sanders over Clinton in 2016, so I guess anything is possible. For that matter, it’s possible that Warren still in the race simply to prevent Sanders from earning a majority of delegates. Oh, the palace intrigue!

Doctor Peters: One Republican’s Take on the Democratic Candidates

FiveThirtyEight: Who Will Win The 2020 Democratic Primary? 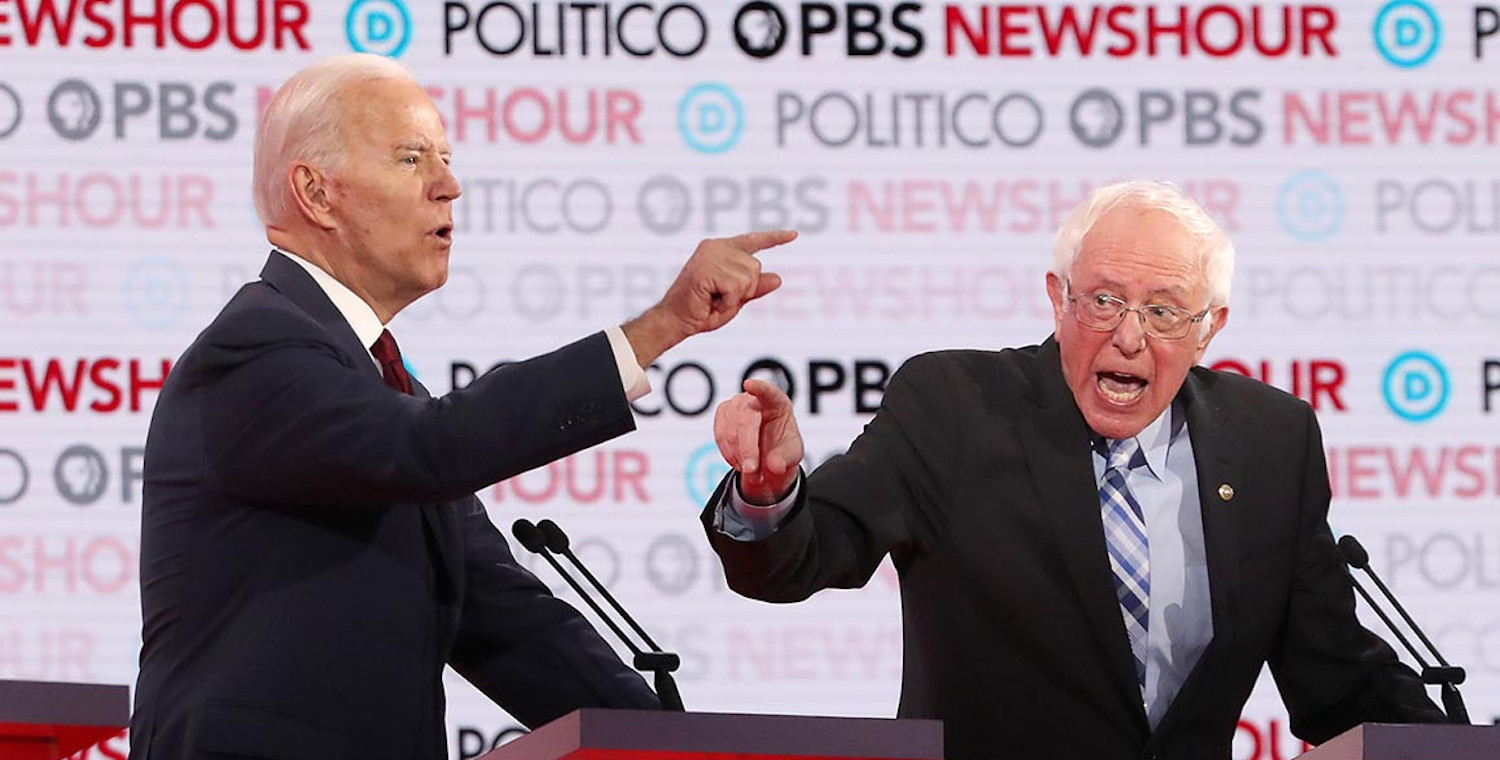 This just doesn’t look like any fun, does it? Well, it’ll be entertaining for some, perhaps, but it hardly looks like a good time to me. Biden, Sanders, Bloomberg, and Trump should be cast in a reality TV show. Well, I guess that’s what we’ve got already, right?

I already miss Yang and Buttigieg, two of our young former candidates. If Gabbard stays in beyond tomorrow, will she be allowed to participate in debates going forward? It’d be really refreshing to have some participation from the the sole remaining younger participant.

May You Live in Interesting Times

Before we get to the main event leading up to November, the two Democratic front runners, Sanders and Biden, are both extremely problematic.

Sanders is far to the left of not only the average American, but even a large fraction of the Democratic electorate. Some of my progressive friends are already claiming that the DNC is rigging the system to stop Sanders. But, while that may be true, I think they should also realize that much of the Democratic electorate simply isn’t as far to the left as are they and Sanders (and Warren).

Biden is the compromise candidate, and he is indeed compromised. As I said early on, Biden is the weakest presumptive front runner since Jeb!, which is why he’s sharing the spotlight with Sanders. Biden is a stutterer, which explains some of his well known speaking stumbles, but I fear not all. He’s also infamous for his gaffes, which seem to be coming with increasing frequency. I’m not a neurologist or psychiatrist, but I’m concerned that Biden is edging into senility. I’m less worried about the health of Sanders’ heart than I am about Biden’s mind.

Looking For A Better Path

On my Facebook pages, I see Democratic friends hostilely squabbling over their preferred candidates. Some of my Republican friends are belittling all of the Democratic candidates, oftentimes with personal attacks. I even had to block someone on Facebook today for repeatedly making crass comments about Buttigieg for being gay. I rarely block anyone, usually resorting to simply hiding or deleting offensive comments, but life is too damn short to deal with some people.

I’ll be leaving for a founding meeting of our Johnson county Better Angels alliance in less than an hour. I have no doubt that will recharge my emotional batteries, working with people who desire to forge a better path forward. My friends, we can do better, and we must do better!

One Republican’s Take on the Democratic Candidates Coronavirus